In this section, we will describe the Decentralized Proof-of-Authority consensus and its implementation in IBAX.

# What is Decentralized Proof-of-Authority consensus

Decentralization has always been our firm belief. It refers not only to IBAX’s infrastructure network environment. Instead, we will let decentralization take root in each ecoLib created in IBAX Network and use technical solutions to achieve a high degree of self-governance in each of them. For the purpose of highly distributed self-governance, we have made many changes in the overall architecture and technical implementation. However, in practice, we cannot avoid the centralized management concept. In order to find a balance between centralization and decentralization, in addition to the DPoA consensus mechanism, we have also formulated certain reward and incentive programs.

IBAX Network has created a new consensus mechanism that combines distribution, weak centralization, and a certification authority. We call it DPoA (Decentralized Proof of Authority). To ensure continuity for the entire IBAX Network, the consensus covers not only IBAX Public Network, but also ecoLibs created by each user and user group. This creates a truly self-governed, decentralized, fair, transparent, and fraud-proof Decentralized Autonomous Organization (DAO).

DPoA has a prevention mechanism against network attacks and allows creation of Mint Nodes that guard the network and mint new IBXC coins. IBAXCoin holders can stake a part of their IBXC liquidity balance in Mint Nodes for Mint & Stake Emission Rewards. Minting and staking serve to increase the cost and difficulty of attacks and increase the total value of IBXC coins proportionally. With this mechanism, the probability and harm of any attack are infinitely close to zero.

An attacker may send large amount of transactions and blocks to a targeted node in the network, making an attempt to disrupt its operation and make its services unavailable.

The DPoA mechanism is possible to defend against DoS attacks:

As to the scenario with the DPoA consensus, the 51% attack requires an attacker to obtain control over 51% of network nodes. But the scenario for the PoW consensus is different, which an attacker needs to obtain 51% of network computational power. Obtaining the control over nodes in a permissioned blockchain network is much harder than obtaining the computational power.

For example, in a network implementing the PoW consensus, an attacker can increase computation power (performance) of the controlled network segment thus increasing the percentage of controlled nodes. This makes no sense for DPoA consensus, because the computational power of the node has no impact on the blockchain network decisions.

# Implementation of DPoA consensus in IBAX

In IBAX, only honor nodes can generate new blocks, which maintain the blockchain network and the distributed ledger.

The list of honor nodes is kept in the blockchain registry. The order of nodes determines the sequence in which nodes generate new blocks.

The following formula determines the current leader node, i.e. a node that must generate a new block at the current time.

New blocks are generated by a leader node of the current time interval. At each time interval, the leader role is passed to the next honor node from the list of honor nodes. 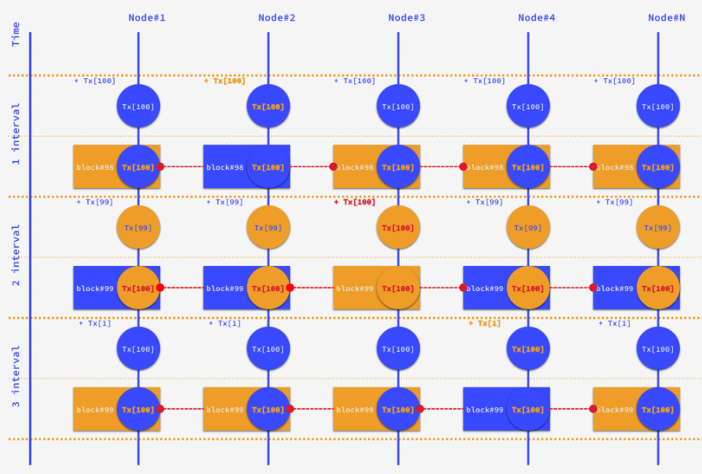 a) Steps for Generation of new blocks

Main steps for generating a new block are as follows:

b) Verification of new blocks

Steps for verifying new blocks on other honor nodes:

1.Receive a new block and verify:

Forks usually occur when a part of the network becomes desynchronized. Factors that are probably result in forks are high network latency, intentional or unintentional time limits violation, time desynchronization at nodes. If network nodes have a significant geographic distribution, block generation interval must be increased.

Forks are resolved by following the longest blockchain rule. When two blockchain versions are detected, honor nodes rollback the shorter one and accept the longer one. 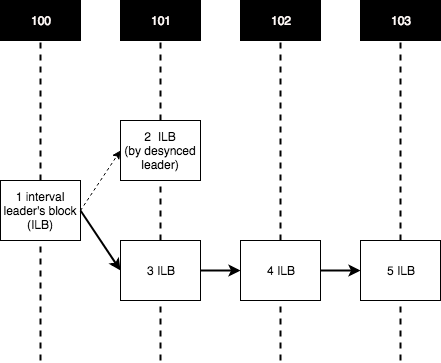